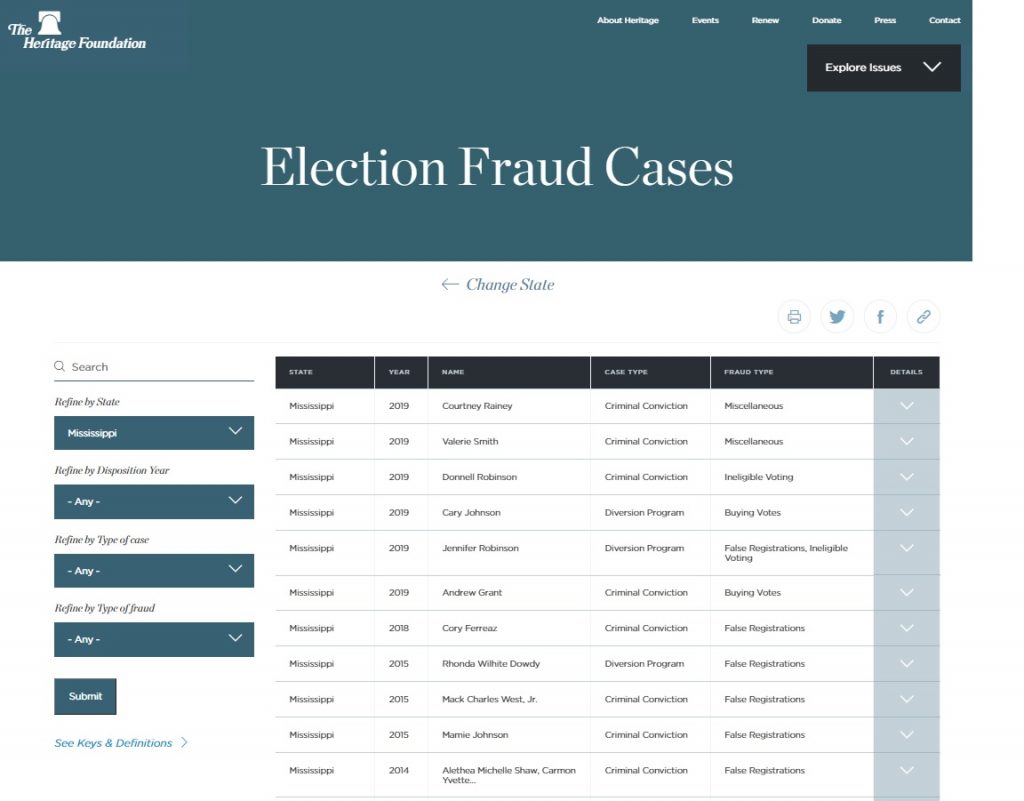 Election fraud is a concern in Mississippi

Concerns over election fraud have increased in recent months as mail-in voting has been expanded in various states during the pandemic.  A prevailing media narrative is that election fraud is largely a partisan claim Republicans use to suppress Democrat turnout.

Reuters recently asserted as much in an article entitled, “How a small group of U.S. lawyers pushed voter fraud fears into the mainstream,” where the news organization called worries over the vulnerability of our election systems a “once-fringe theory,” claiming the concerns  were now “a staple of Republican politics, due largely to the efforts of a small network of lawyers who have promoted it for two decades, funded by right-wing foundations.”

Yet, Reuters thought enough of Ike Brown to use him as a reference in their article, getting a quote from him to help make their case against Republicans’ election integrity concerns.  Brown said the DOJ case “was all a scam,” telling Reuters, “We were able to get poor people to vote and they didn’t like it.”

Reuters takes the Democrats’ narrative further, referring to stricter Voter ID laws passed by nine states since 2005, and saying Republicans “have sought purges of voter rolls that could disproportionately affect minority voters, who tend to vote for the Democratic Party, according to voting-rights advocates and election officials who have opposed these efforts.”

“As a legislator, I supported the passage and implementation of Voter ID in Mississippi due to my commitment to ensuring every ballot cast is free of fraud or error. Identification is required for just about everything, from purchasing a hunting license to opening a bank account or boarding a plane. I believe something as precious as our right to vote should require an ID as well,” Watson told Y’all Politics.  “Our Voter ID law has helped to uphold the integrity of our elections and restored confidence in Mississippi’s administration of clean and fair elections. As Secretary of State and Mississippi’s Chief Election Officer, I remain committed to narrowing the gap of opportunity for voter fraud.”

Even still, since its implementation of Voter ID in 2014, Mississippi has seen attempts to undermine the integrity of the vote.  For example, in 2017, the Canton municipal elections resulted in 15 indictments on 25 counts of voter fraud.

The Mississippi Secretary of State and Attorney General receive reports of election fraud and other voter concerns each election cycle, with several allegations of fraud at various stages of investigation by the Attorney General’s office even today.

“Our office receives reports each election from local officials and voters regarding the mishaps with mailed ballots and ballot applications. We’ve heard countless stories about voters receiving ballots they did not request and Circuit Clerk’s mailing ballots that were never received by the voter,” Watson said.  “While our office has no authority to investigate or prosecute, we encourage any voter alleging or witnessing fraud to file a report with the Attorney General’s Office or local District Attorney.”

Mississippi has not expanded “no excuse” mail-in voting, yet it has allowed those who have increased health risks to be able to vote absentee for the November election. Watson has said that the opportunity for fraud is significantly greater for mail-in voting.

“Regarding the national conversation about vote by mail (VBM) elections, that process opens up many more opportunities for fraud than the stricter absentee mail-in ballot process,” Watson said.  “In VBM elections, every registered voter is mailed a ballot that is either returned by mail or dropped into a ballot bin. Imagine the possibilities of individuals who desire to subvert the election process by stealing and/or manipulating ballots laying in mailboxes of individuals who either didn’t know to be looking for a ballot, or even worse, who shouldn’t have been on the voter rolls to start. That’s but one example of those we’ve seen around the country.”

One issue that adds to this increased potential for election fraud when discussing vote by mail is the need to update or purge voter rolls.  Secretary Watson said most counties in Mississippi are doing a great job maintaining their voter rolls, but there is still work to be done.

“Currently, there are four counties reporting more than 100% of their population as registered voters, which is impossible. Our office sent a letter to the counties near or above 100%, encouraging them to work diligently to clean up their voter rolls,” Watson said.  “Mississippi is a bottom-up state, so local election officials are responsible for maintaining voter rolls. However, when I first took office, we launched an 82-County Tour allowing me to meet with the Circuit Clerks and Election Commissioners in every county to build relationships and to offer guidance and support with this process as well as other election-related issues.”

In recent years, increased scrutiny over the possibility for undocumented or illegal immigrants to vote has risen to the forefront in many minds when discussing election integrity and voter fraud.  Secretary Watson says his office compares new voter registrations to the registrations in the Department of Public Safety database, which checks for citizenship status.

“Occasionally, we see instances where non-citizens attempt to register to vote,” Watson noted, “but many of those individuals do not understand it is illegal and seek to withdraw their applications once realizing the consequences.”

Watson says Voter ID has been instrumental in ensuring that only U.S. citizens are voting, yet he says more can be done to safeguard election systems.

“We crafted and helped get legislation out of two Senate committees that would make it even harder for illegal immigrants to vote in Mississippi,” Watson said.  “Unfortunately, it didn’t make it off of the Senate floor this session, but we are committed to continuing our work on the issue.” Attorney General Lynn Fitch’s office is monitoring the election cycle for reports of fraud.  The office is keenly aware of the need to ensure voter integrity, while providing a safe environment during these challenging times as in-person voting is accomplished across Mississippi.

“As your Attorney General, I take the integrity of the ballot very seriously,” Fitch told Y’all Politics.  “Thank you to the Secretary of State and local election officials for all the extra steps they are taking to promote a safe voting environment at the polling places this year. We will continue to work together to ensure the safety of voters while working diligently to preserve the integrity of the November general election by safeguarding in-person voting.”