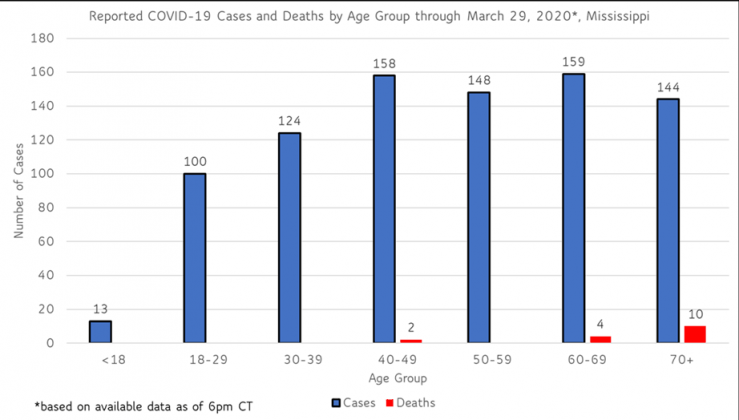 Mathematical Context for Coronavirus in Mississippi

Coronavirus is a serious deal, and it’s scary because it’s largely unknown.  And the numbers are going to get worse.  Likely in the next 10 days.  Based on what we have seen in the most affected areas nationally, which is primarily our most urban areas in places like New York, Los Angeles, and Chicago, it can get out of hand in a hurry.

However, what we have seen nationally, and for reasons we may not yet fully understand, the spread of the virus is uneven.  The fact that it is not tested or documented the same from state to state leads to even more uncertainty.

There have been, according to the Mississippi Department of Health, 195 hospitalizations due to Coronavirus.  Those are not current hospitalizations, but rather hospitalizations attributable to the virus since the pandemic began.  Presumably, all of the 16 deaths that have occurred to date occurred in a hospital which gives some guidance about the mortality rates relative to hospitalization.

Liz Sharlot from the MS Department of Health stated, “We have become more aggressive in testing, there are a lot more healthcare providers testing, and we have expanded the criteria for testing.  For example, earlier, we said only test if a fever is 100.4 or higher and accompanied by chest pain or severe cough.  Now we simply say a fever without stipulating a number.  Our focus has been and continues to be on: testing, identifying positive patients, and contact tracing to any individual who might have been exposed. Unfortunately, there will be more cases and deaths as the pandemic progresses.”

Just to evaluate the trendlines, here are the daily growth rates of confirmed cases and death rates provided by MSDH.  The confirmed cases may be subject to uneven testing regiments and availability from county to county, but the death rate is mostly a pretty accurate reflection.

But we are testing more and in more places and data could likely indicate “hot spots” even within our state’s borders leading to what Governor Reeves has hinted at in recent days which is a different localized application of restrictions on social distancing to combat more localized outbreaks.

Again, as context from Wednesday to Thursday of this past week, Louisiana identified 510 new cases for a total of 2,305 on Thursday.  That’s a one day jump of 28.4%.  Though it appears we didn’t start on the same numerical baseline, Louisiana may be a cautionary tale of where we could wind up.  Or to put it another way, Louisiana was where we were on confirmed positive cases (about 850 cases) 8 days ago.  Today, they’re over 4,000.

Clearly now is not the time to let up on our efforts.  President Trump has extended the CDC guidelines for social distancing through the end of April. Still, it is essential to have the numbers in context so as a state we can figure out how exactly to resource and tackle these issues.

We will continue to track this information daily and provide updates.  In the meantime, stay safe, stay separated, and wash your hands.