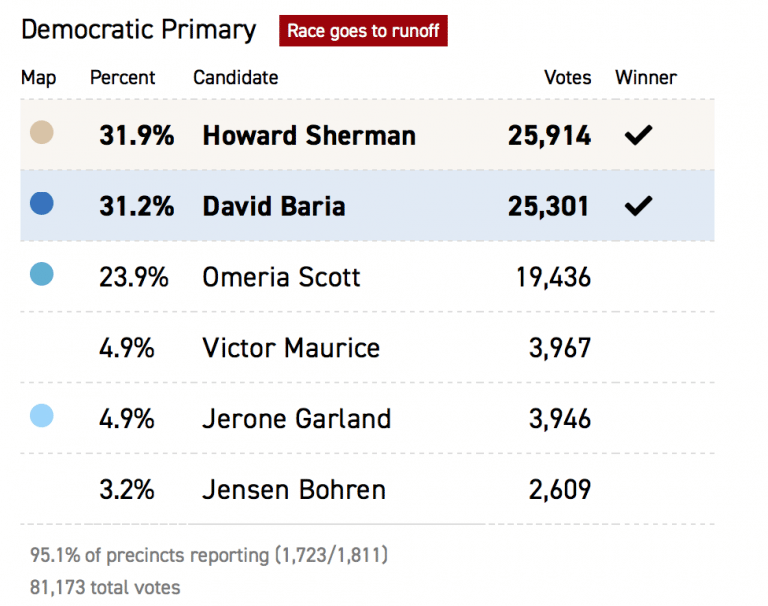 The votes are in, see who is headed to the November ballot and who will face a runoff Tuesday, June 5, was the Mississippi primary for one U.S. Senate Seat and two House seats. Here are the results:

In the Democratic primary it looks like a runoff is in the future for Howard Sherman and David Baria. Baria had been leading in the polls until the end there when Sherman took the top only, retaining only .7% more of the vote than Baria.

In the Republican primary Senator Roger Wicker took the win by a landslide 82.6% of the vote over Richard Boyanton’s 17.4%.

In District 1 both the Democratic and Republican candidates ran unopposed, ensuring their names will be on the ballot in November. For the Democrats it’s Randy Watkins, and for the Republicans it’s incumbent Trent Kelly. However it’s a different story for the 3rd District. In total there were six Republican candidates and two Democratic candidates. Results from the Democratic primary between Rep. Michael Evans and Michael Aycox showed Evans took the win with 69.7% of the vote. However, for the Republican primary it looks like a runoff will be held between front runners Michael Guest and Whit Hughes. After the votes were totaled, Guest won with just over 45% of the vote and Hughes behind him at 21%.

In District 4 Democratic candidate Jeramy Anderson ran unopposed ensuring his name will be on the November ballot and Republican incumbent Steven Palazzo beat E. Brian Rose with 70.5% of the vote over Brian’s 29.5%.

The runoff election will be held June 26.