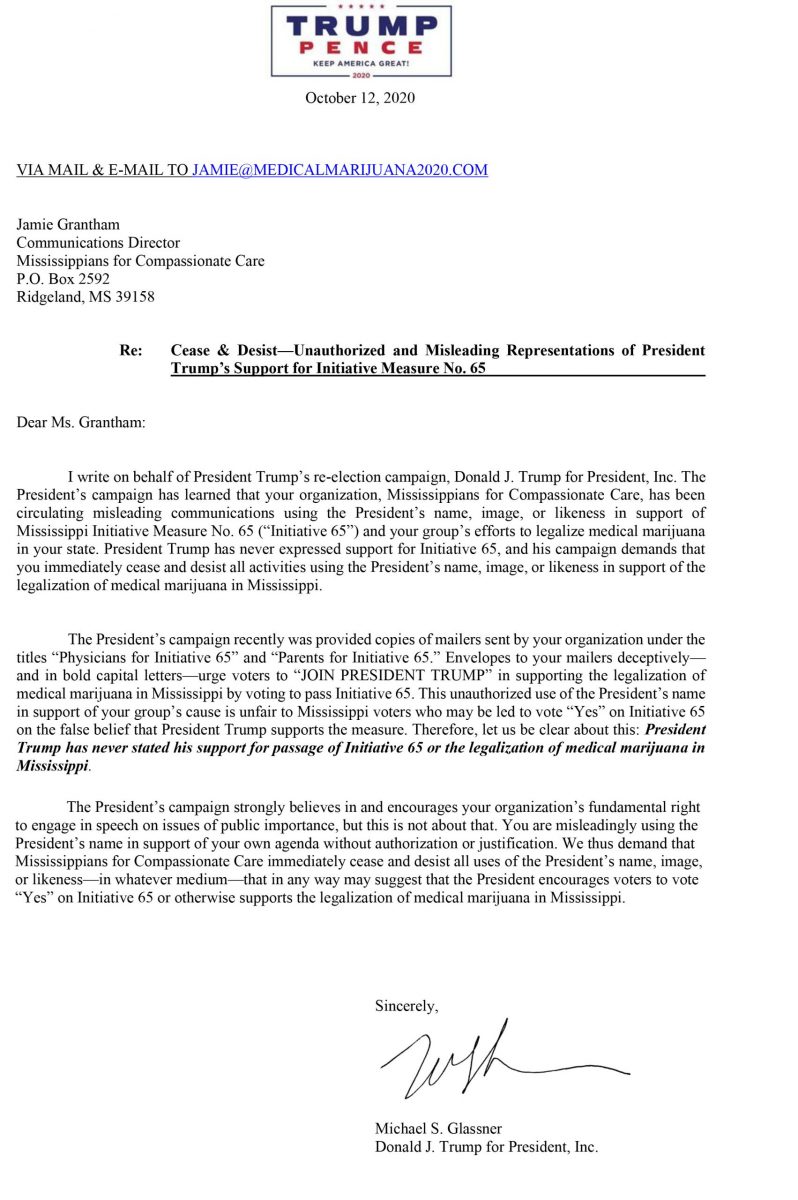 The Trump for President Campaign issued a Cease and Desist letter on October 12 to Mississippians for Compassionate Care “for unauthorized and misleading representations of President Trump’s support for Initiative Measure No. 65.”

The letter from Michael J. Glassner, a senior official with the Trump Campaign, to Jamie Grantham of the Mississippians for Compassionate Care states, “your organization has been circulating misleading information using the President’s name… President Trump has never expressed support for Initiative 65, and his campaign demands that you immediately cease and desist all activities using the President’s name, image or likeness in support of the legalization of medical marijuana in Mississippi.”

The Trump campaign letter continues, “mailers sent by your organization…deceptively – and in bold capital letters – urge voters to “JOIN PRESIDENT TRUMP” in supporting the legalization of medical marijuana by voting to pass Initiative 65…let us be clear about this, President Trump has never stated his support for passage of Initiative 65 or the legalization of medical marijuana in Mississippi.”

Glassner also wrote, ”You are misleadingly using the President’s name in support of your own agenda without authorization or justification.”

“We are pleased President Trump’s campaign has called out this false and misleading tactic by the marijuana industry’s Initiative 65 campaign,” said Jim Perry, board member of the Mississippi Department of Health. “I am disappointed to say there is a pattern of deceptive statements from the pro-65 campaign.”

“Medical marijuana is a serious issue and deserves a fact-based discussion, but the Initiative 65 campaign is taking the playbook from Big Tobacco that said cigarettes were good for you,” Perry continued. “Big Marijuana is spending millions to try to persuade Mississippians that they should give a $14 billion marijuana industry special protections in our State Constitution that will give them a free ride on taxes, take away the ability of local officials to regulate marijuana in their community, while also giving this big industry immunity from criminal and civil sanctions. Mississippians need to vote against Initiative 65 on November 3rd .”

Below is a sample mail piece where the group calling themselves “Republican for Initiative 65” says on the envelope, “Join President Trump and 3 out of 4 Mississippi Republicans who support medical marijuana.”

It goes on to say in the letter, “President Trump has expressed his complete support for medical marijuana.”  However, as is noted, he has not voiced his support for Mississippi’s Initiative 65.

The mail piece is paid for by Mississippians for Compassionate Care.

A Mississippi Horizon release contributed to this article.