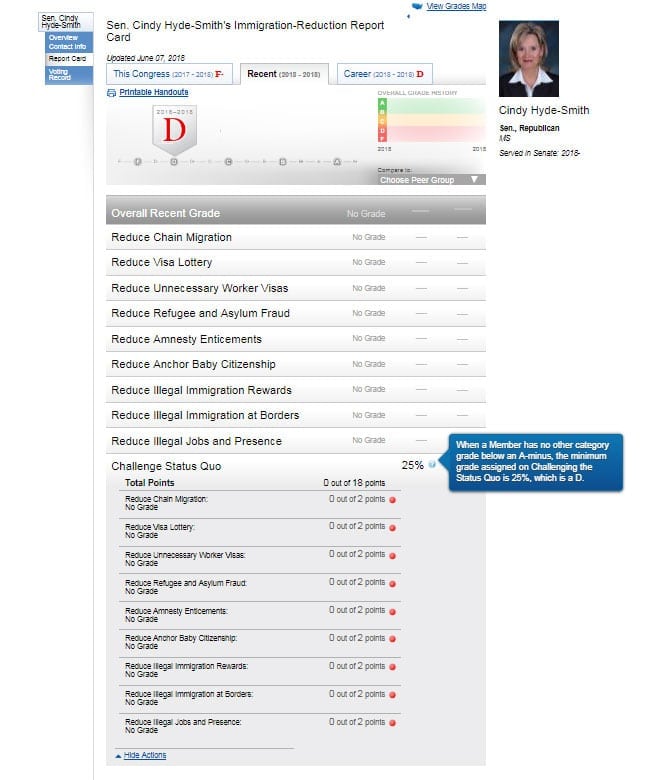 Weaponizing “scorecards” and the folks that lie about them

On Tuesday, Keith Plunkett over at MississippiPEP posted a reference to an immigration watchdog/advocacy group called NumbersUSA who had rated Cindy Hyde-Smith with a “D” on their legislative scorecard.

Bless his heart, the piece even had a spiffy title – “Groups Scoring Cindy Hyde-Smith Show Votes More in Line With Liberals Than Conservatives.”  Curiously, Plunkett, the erstwhile Head of Strategery for Senator Chris McDaniel, did not link the actual scorecard for Senator Hyde-Smith from NumbersUSA.

If you go look, there’s a pretty good reason for that.  Because there have been no votes to score her on in her Senate tenure to date.  Yet she’s compared by Plunkett to Rep. Bennie Thompson, who actually has some votes that they’ve scored as failing.

Again, there have literally been no grades at all for her on their scorecard.  None.  The NumbersUSA policy is apparently that you get a failing grade before you ever make a vote.  Yet Plunkett on behalf of the McDaniel campaign seeks to try and weaponize literal nothingness so that low-information supporters on Facebook have someone for which to blame their lot in life.

Plunkett also didn’t mention that McDaniel’s former arch-nemesis, Roger Wicker, had a B from the same group putting him on par with Senators like Cruz and Sasse.

The release finishes with this doozy – “The McDaniel campaign believes that Cindy Hyde-Smith’s failing grades give Mississippi voters a clear choice this November between Chris McDaniel, who will fight alongside President Trump, and Cindy Hyde-Smith, who votes with Chuck Schumer and Bernie Sanders.”

Plunkett is not only representative of the problem that Chris McDaniel faces.  He is the problem.  McDaniel has real political talent.  He’s tremendous on the stump.  He can convey a message.  But his Achilles Heel has been and continues to be the people he puts in his immediate orbit that he takes advice from.  They’re toxic.  They’re largely incompetent.  They’re the reason that lost his Senate race in 2014.  They’re the reason he’s largely considered a pariah in the state legislature, and they’re the reason, if anemic polling and fundraising are any indication, that he’s not likely to win in 2018.

The prescription is for McDaniel to completely jettison his inner circle and get solid political guidance.  And then listen to it.  But again, don’t count on it.