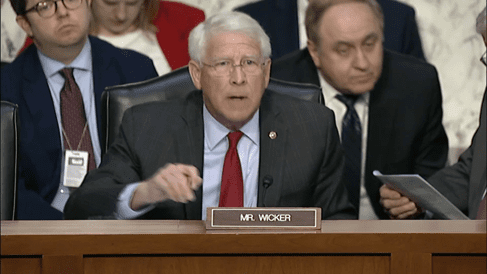 Wicker Votes for Strengthening America’s Security in the Middle East

The final legislation includes several proposals, including new sanctions against Syria, increased military support for Israel and Jordan, and a plan to make it easier for states and localities to approve laws to combat the Boycott Divestment and Sanctions (BDS) movement against Israel.

“The strong bipartisan support of this proposal sends a message to America’s allies that our nation is united in its approach to security challenges in the Middle East,” Wicker said. “This legislation also includes important protections for states and localities who hope to counter the hostile treatment of Israel by the BDS movement.”

Wicker asked Gen. Votel to respond to the recent announcement that the United States has developed a framework for a peace agreement with the Taliban in Afghanistan. The effort could lead to the full withdrawal of U.S. troops, but there are concerns the Afghan government would need to be involved in any future negotiations.

“I just want it to be said that the concerns in this city are bipartisan concerns, and based on advice and counsel that we receive from people who … understand how important it is for us to get this right,” Wicker said.